We recently received an awesome letter from a new camp mom who sent their son Christian to Camp Carolina for the first time. Christian came to the awesome Father-Son weekend in May and his Mom said “He had a wonderful time but was still hesitant about going so far from home – his first time away for more than a weekend – without his Dad.  We registered and waited.

“During the first week of camp we were spoiled by wonderful photos – thank you so very much for those, but the way.  Happy campers, happy parents and boy were we thrilled.  Christian sent a wonderful letter home and so did Paul (his counselor).  We received two letters from Paul actually, and the second was two pages long!  How blessed we were to have someone taking such great care of our son – real care.  By week one Paul understood Christian’s shyness, his need to be challenged and got a handle on that “cheeky smile” our son has! 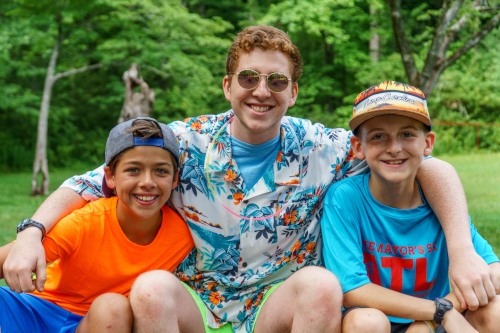 We cannot say enough about your staff, the facilities and everything about Camp Carolina.  My two calls to the office were met with an understanding voice, helpful info and, the first week, a return call from a counselor who had checked on Christian (I admit it – I called to check on day two)!

Of all the photos and stories, one will forever stick out – the campfire where Christian, earlier than some other campers, received his Camp Carolina paddle.  In Christian’s nine years, he has accomplished many things, but none more pride-filled than earning his “Old Man of the Mountains” paddle.   He told us all about how, “Alfred taught me the proper way to shake hands.  Firm and confident.”  His face in this photo tells it all.  It was a moment we’re thankful to have a picture of.  As parents, we’ve never seen him prouder of himself.  Thank you so much for giving our son the kind of opportunity he’ll never forget. We appreciate this safe haven where Christian could not only be himself, but discover parts of himself he didn’t know he had: confidence, courage and the ability to be away from  home for two whole weeks (next year, three).”

We cannot WAIT to make memories like this during summer 2019!

Posts in A Day At Camp

The First Afternoon At Camp!

A Day At Camp